So you already know that my name is Ginger The Dog, right?  GOOD!  You should probably also know that I’m a German Shorthair Pointer.  As you can see, I am like totally fabulous.

I lived in Seattle, WA, I was a year and a half old when I met, Richard, my human.  He brought me here to live in his house, which I promptly took over and made my very own.

Richard wants to tell you his side of that story.  He wrote this when we had been together for only 6 months. (We’ve now been together over 10 years!)

So let’s humor him, shall we?

It was a dark and stormy night…oh wait, wrong story.

My odyssey with, Ginger, the beautiful German Shorthair Pointer, my new companion and housemate, actually started with another dog.  It was late afternoon on Thanksgiving day, 2000.  I had just finished a sumptuous dinner and needed some exercise.  I decided to drive to Seward Park on Lake Washington in Seattle for a vigorous walk.  As I approached the parking lot I noticed a young female Rottweiler who was in obvious distress.  Was she lost?  Was she abandoned?  I didn’t know.  All I was sure of was she needed help.  I stopped the car, got out and called to her.  She wouldn’t come to me.  I parked the car and tried again. This time I crouched down trying to make myself smaller and less threatening.  Miraculously, she came to me.  She had a collar but no identification.  I had a length of rope in the car and quickly fashioned a makeshift leash and proceeded to take my walk.  It was clear from how she responded to being on a lead that she had some training.  An hour later, the walk completed, I decided to take her home.  She was in desperate need of a bath and she was very hungry.  Once those things were taken care of she settled in to my home like it was her own.

The next day I set about finding her lost family, that is, if she had one.  I posted a notice on the animal shelter bulletin board and placed a few notices around the park.  I had mixed emotions when, after three days together, her lost family contacted me.  It wasn’t easy for me to give her up, but it was clear that she belonged with her family.

This brief adventure reawakened in me a long suppressed desire for canine companionship.  There hadn’t been a dog in my life since I was a teenager living in my parent’s home.  But was I ready to assume this kind of responsibility?  Was I even thinking clearly about the kind of commitment this would involve?  Perhaps this was just a fleeting fancy.  Maybe I was just in love with the idea of having a dog.  Well, there was only one way to find out.  I launched an intensive Internet search.  I read everything I could find about caring for a dog.  This was both exhilarating and intimidating.  I discovered two very important things that every perspective dog owner should know.  First, there is a bewildering array of dog training techniques and philosophies.  Second, lots of breeds have websites and most of these sites have links to rescue programs for that particular breed. 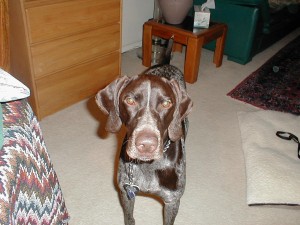 Point #1.  To my great dismay I discovered every “expert” in dog behavior had his/her own approach to training a dog, and most of these conflicted with one another.  Each trainer was as dogmatic as could be.  Their way of doing things was the only way to do them, and that was that.  This wasn’t at all helpful.  In fact I began to resent their arrogance.  Dog trainers may have some insight into dog behavior, but most haven’t a clue about how to handle a nervous pet owner.  As it turned out, I decided to pick and choose the techniques that fit my personality and hope for the best.

Point #2.  I knew that if I actually got a dog I wanted to rescue a dog, one that had been abused, neglected or abandoned.  I wanted to be part of the solution rather than contribute to the problem.  I signed up for a bunch of rescue programs associated with the particular breeds I liked, and decided to let fate do the rest.  If I was meant to have a dog, she would have to come to me and not the other way around.

Weeks later I got an email from the German Shorthair Pointer rescue telling me a young female needed a good home.  Pictures were included.  It was love at first sight.  There was also a brief history of the dog’s troubled puppyhood.  My heart went out to her immediately and I simply couldn’t say no.  I agreed to meet the dog and before I actually had time to process what was happening, Ginger had taken up residence in my home.

Six months have passed since then.  In that time we’ve established a lifelong bond that seems to serve us both well.  We celebrated her second birthday together and she is happy to be finally home.

I can hear you all now, a chorus of, “awww, how sweet.”  Well, before you jump to any misguided conclusions, I’d better state emphatically that these past six months have been one of the most trying times of my life.  I am not embarrassed to say that I simply couldn’t cope with Ginger for the first couple of months.  Had it not been for our guardian angel, Mary Freel, of the GSP rescue program in Oregon, Ginger and I would never have made it this far.  Mary was absolutely indispensable to making this relationship work.  She was totally available to me with words of encouragement and sage advice.  Her passion for German Shorthair Pointers was infectious.  Whenever I was at my wit’s end, and I confess that was pretty often, she was there for me.  And for this Ginger and I are eternally grateful. 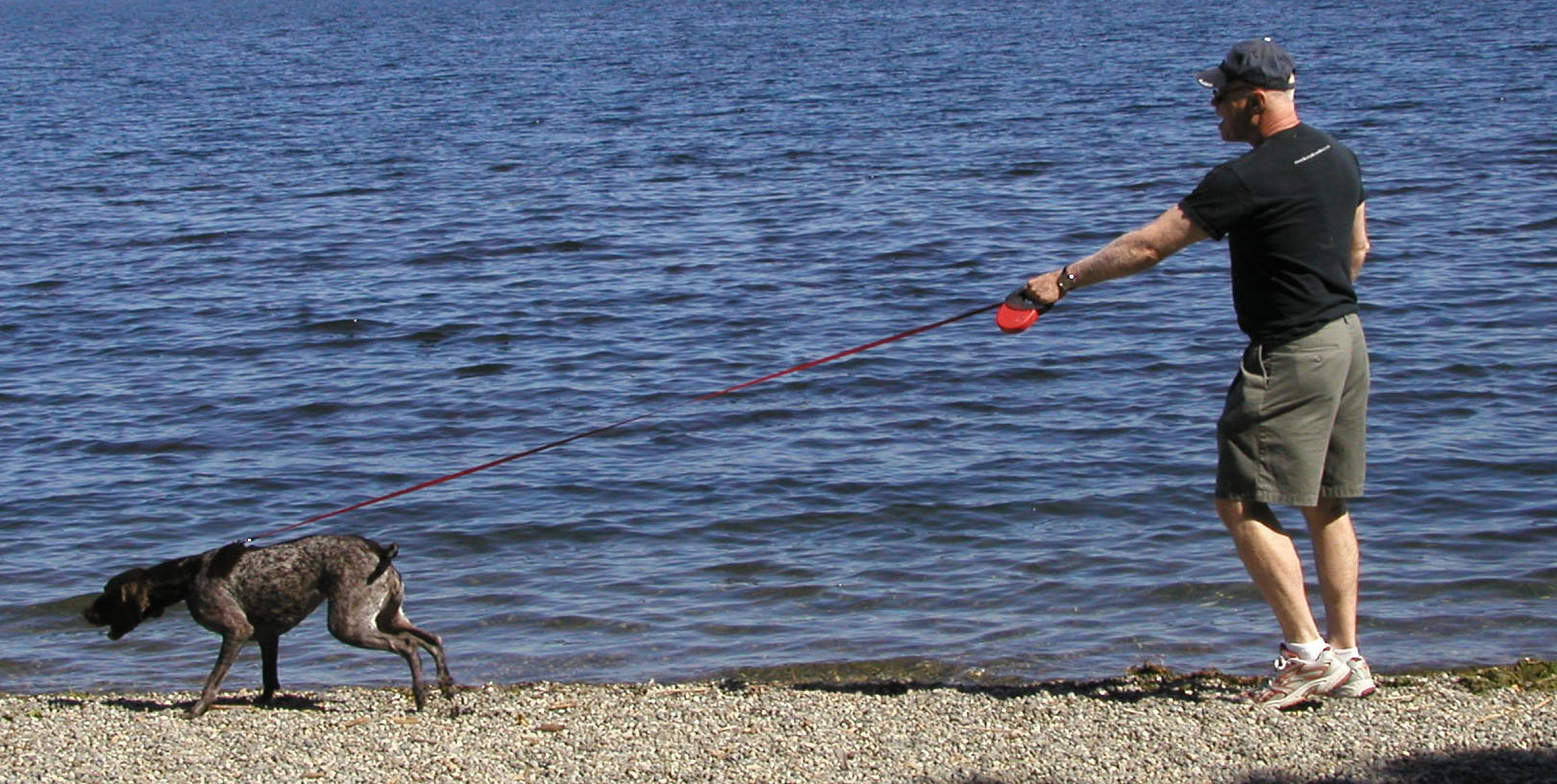 German Shorthair Pointers, I swiftly discovered, are extremely intelligent and full boundless energy.  They are also stubborn, arrogant, willful, and pig-headed.  Not bad things necessarily, except these same adjectives could also be used to describe me.  So from our first moments together, Ginger and I have been dukeing it out for domestic superiority.  And even now I only sometimes have a bit of confidence that I am the alpha personality in this relationship.

These past six months have been a crash course in animal behavior and I’m not just talking about the four-legged variety.  It is true that I’ve learned a great deal about dogs in general and GSP’s in particular, but the most startling revelations I’ve made have been about me.  And I can tell you my discoveries haven’t always been particularly attractive.  I am not nearly as patient, understanding and accommodating as I thought I was.

Nothing I read previous to this adoption had prepared me for what I actually encountered.  Ginger’s tragic puppyhood, the reason for her rescue, only compounded the problems we faced.  She has psychological scars that I don’t think will ever completely disappear.  She has an insatiable appetite for attention and affection.  She has enormous abandonment issues.  She is slavishly attached to me when we’re indoors, and completely dismissive of me when we’re outdoors.

Despite all of our individual shortcomings, Ginger and I have settled into what passes for a normal life together.  She has amazed and endeared herself to all of my friends.  In other words, we have become family together. 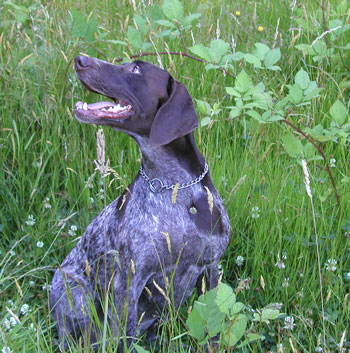 For more information about our Dog Walking and Sitting Services contact me at: ginger@outyourdog.com

Or my human, Richard, at: richard@outyourdog.com